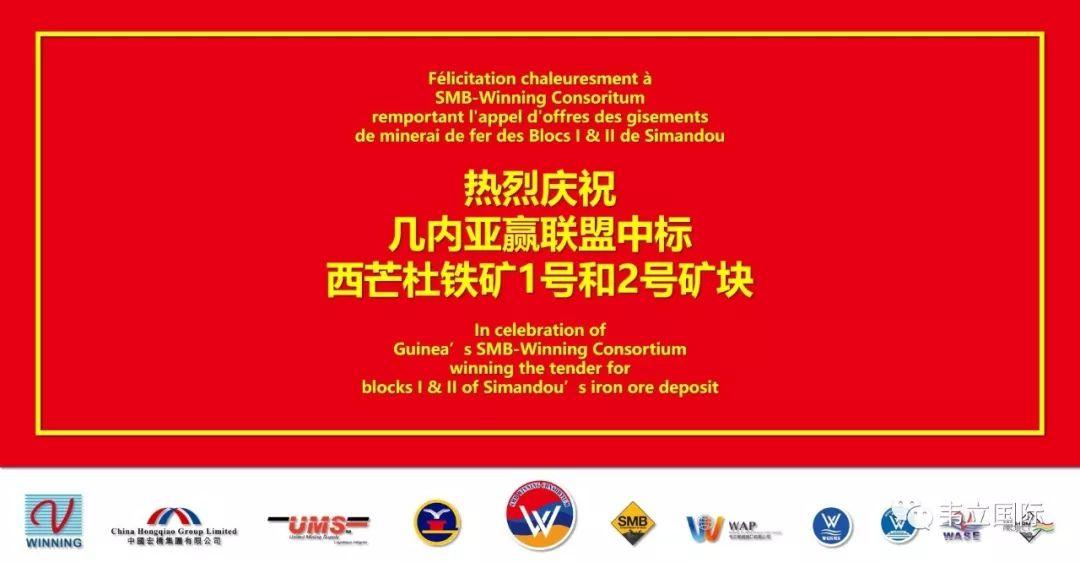 Conakry, Republic of Guinea, November 12th, 2019 – Today, according to the official notice from Guinea’s Ministry of Mines and Geology, the government commission in charge of the international tender for blocks 1 and 2 of Simandou has came to a decision after evaluation that Société Minière de Boké, the mining company of SMB-Winning Consortium led by Singapore’s Winning International Group, has exclusively won the tender for the mining blocks. Société Minière de Boké is now officially the “Temporary Selected Eligible Bidder”, and will now enter the negotiation phase for the Conventions of said project.

SMB-Winning Consortium is currently Guinea’s largest bauxite developer. Through the Consortium’s efforts, Guinea became the world’s largest exporter of bauxite in just four years. It is believed that regarding the development of blocks 1 and 2 of the Simandou project, SMB-Winning Consortium will once again assist Guinea in unlocking her rich and high-quality iron ore resources through even more innovative and efficient development models.

Mr. Sun Xiushun, Chief Commander of Guinea’s SMB-Winning Consortium and the President of Singapore’s Winning International Group has stated after winning the tender, “This is incredibly exciting news. This also means that there is even more pressure on our shoulders. We were successful in the creation of the largest bauxite project in Guinea, and now we hope to be even more innovative, more environmentally friendly and efficient in developing blocks 1 and 2 of Simandou. Through mining, railway construction, port construction, and community development, we will once again build a mining project with a capacity of 60 million to 80 million tons. This will greatly benefit Guinea and her people, which is the commitment SMB-Winning Consortium has made to change and develop the country.”

Simandou is located approximately 650 kilometres southeast of Guinea’s capital city Conakry. The Simandou mine is one of the world’s largest untapped and richest high-grade iron ore deposits. It is an open-pit mine with estimated reserves of billions of tons. In March 2019, the Guinean government reached a settlement agreement with Israel’s BSGR and successfully regained blocks 1 and 2 of Simandou. The Guinean government has stated that the ore from Simandou must be exported through the railway and port within Guinea, requiring the construction of a new railway and port to Guinea’s coast, both within the boundaries of the country.

The success of the project’s operation has stimulated an increase in the Guinean GDP, strengthened Guinea’s foreign exchange balance, created nearly 10,000 direct job openings, 20,000 indirect employment opportunities in the country, and benefited more than 100,000 Guinean families. To better carry out her corporate social responsibility, the SMB-Winning Consortium has invested a vast amount in communities in the mining zone, including the construction of rural roads, schools, vocational training centers, rural clinics, and wells, to improve the well-being of local folks.